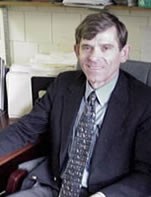 Prof. Hale served in the U.S. Peace Corps in Niger from 1964 to 1966, an experience that prompted him to study Afro-Caribbean and African literature.  In 1975, he was one of the founders of the African Literature Association. After focusing his research on the writings of the Afro-Caribbean author and political leader Aimé Césaire in the 1970s, he turned to the oral literature of the Sahel region.  There he recorded epics and interviewed griots for a book on these multi-functional bards.  In the last decade, he and former student Aissata Sidikou conducted research on women’s songs from West Africa.

The Fulbright program, the National Endowment for the Humanities, the U. S. Department of Education, and the United States Information Agency awarded him grants for research, teaching, and the development of linkages with African universities. In 1995, he was the inaugural recipient of the W. LaMarr Kopp International Achievement Award "for significant contributions and accomplishments in advancing the international mission of the University.” From 2001 to 2008 he served as head of the Department of French and Francophone Studies.