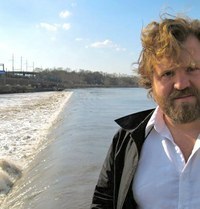 Jonathan P. Eburne is editor-in-chief (2017-) and co-founder (with Amy J. Elias) of the award-winning ASAP/Journal, the scholarly journal of ASAP: The Association for the Study of the Arts of the Present (https://www.press.jhu.edu/journals/asap_journal/); he is also editor of the "Refiguring Modernism" book series at the Pennsylvania University Press. He is the author of Outsider Theory: Intellectual Histories of Unorthodox Ideas (University of Minnesota Press, 2018) and Surrealism and the Art of Crime (Cornell University Press, 2008), and co-editor of four additional books: Leonora Carrington and the International Avant-Garde (2017), The Year's Work in Nerds, Wonks, and Neocons (2017), The Year's Work in the Oddball Archive (2016), and Paris, Capital of the Black Atlantic (2013).

Eburne’s teaching and scholarly interests include international avant-garde movements, twentieth- and twenty-first century literature and the arts, and literary and cultural theory.

Surrealism and the Art of Crime
(Cornell University Press, 2008)
Edit this publication