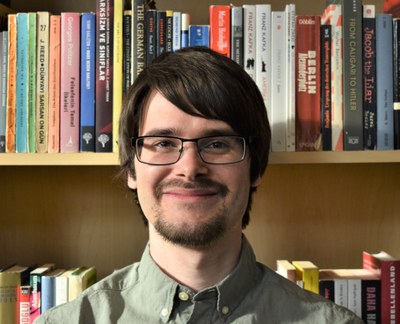 Duncan is a sixth year Ph.D. candidate specializing in transnational German literature with emphases on Turkish-German Studies and literary multilingualism.

His dissertation examines the form of peripheral realism developed by Turkish-German authors who drew on conceptions of realism which circulated between the pre- and post-war German states, Soviet Union, and Turkish Republic in Turkish-German literature. Proceeding from this literary-historical context, “Allotropes of Realism: The Bilingual Political Imaginary of Turkish-German Literature (1972-2015)” demonstrates how the intersection of bilingual writing strategies with realist aesthetics allowed writers such as Fakir Baykurt and Emine Sevgi Özdamar to figure novel forms of political collectivity across the borders of class, nation, gender, and language.

In addition to his article “‘Habt ihr was für mich?’: Critical Collectivity in Terézia Mora's ‘Selbstbildnis mit Geschirrtuch’ (2016),” which appeared in German Quarterly, Duncan has published on the poetry of Hugh MacDiarmid and Charles Tomlinson in Philosophy and Literature. He is the recipient of the 2020 Gutekunst Prize of the Friends of Goethe New York for his translation of an excerpt from Dilek Güngör’s novel Ich bin Özlem (I am Özlem). Other teaching and research interests include language pedagogy, global migration literature, human rights narratives, and visual narratives.

CMLIT 107: The Literature of Exploration, Travel, Migration, and Exile – Fall 2022